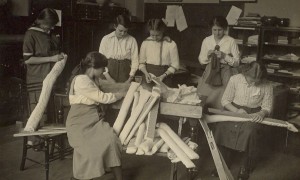 Manchester High girls and staff had a very busy war. They worked in local Red Cross hospitals as nurses and ancillary staff, acted as interpreters for Belgian soldiers who were patients in Manchester hospitals and made huge quantities of jam and clothes for patients. One old girl worked as a doctor in Serbia, a member of staff worked with the Quakers in France and died of typhoid and one of the Governors was active in founding a hospital at Grangethorpe.

The present school is built on the Grangethorpe site. Some scholarships were endowed for the daughters of sailors, one of the magazines contains a letter from the officer on a torpedo boat destroyer who signed himself “Chevalier of the Legion of Sea Hun Strafers,” and much more.

The images held in this archive are supplied solely for the customer's personal use or private study. Images may not be published or reproduced in any way in any book, pamphlet, magazine, calendar, publicity, promotional material or other similar material. Images may not be used in television or video nor on any other internet site. Images may not be posted to bulletin boards or newsgroups. Downloading or purchasing an image from this site does not mean that you will acquire the copyright of that image. Copyright remains vested in each individual school. The right to use any of these images for publication, commercial use or display purposes requires permission. Customers who wish to reproduce images for such purposes must apply in writing to House of Images who will seek permission from the school. There may be a charge for such use.